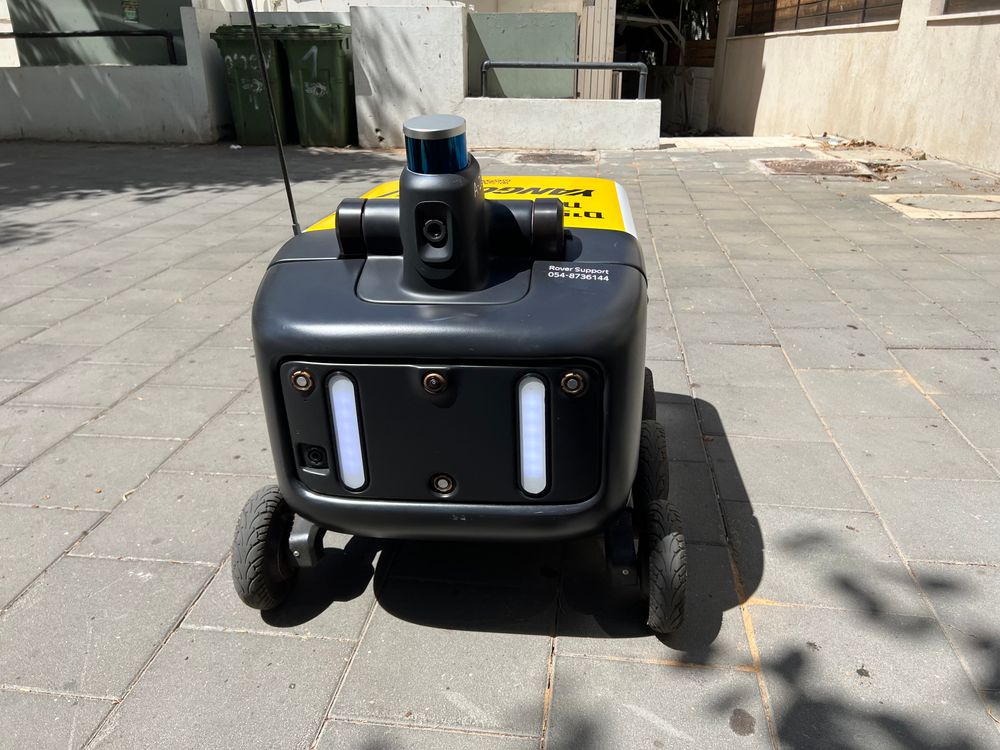 One day of 2022, as I was having breakfast in a coffee in Tel Aviv during a trip, an autonomous robot drives right next to me:

Wow! Seriously, how cool is this? This is the thing I'm not used to when I'm in Paris, so I was glad I could find this during my trip in Tel Aviv!

I couldn't let the opportunity pass.
I had to see where it was going.
What was it delivering?
Was it really autonomous? Or was someone testing it?

Intrigued, I decided to leave my americano coffee, my morning breakfast (including a delicious yoghurt I was having), and even the people who were with me at the table...

To hunt the robot wherever it would go until I have my answers!

30° celsius, I started following the robot.
The total trip lasted about 3 kilometers.

Here are 7 things I noted:

There was no human operating the robot. It was completely operating on its own. In the street, in the middle of thousands of pedestrians, cars, and cyclists. Which means the autonomous tech revolution is already happening.

How is that possible? We already see autonomous car taking passengers in San Francisco, California and other places in the world. Here, it felt special to see something like this driving in a different place.

Special, but definitely not impossible. It's a low speed vehicle (15 km/h) with no human lives at stake. Every time you do "low speed" autonomous, you have much more ease to operate, get approvals, operate without a human, etc... The worst case scenario is that a small robot runs into someone or something at super low speed.

Was the robot driving on the road? No! It was driving in the sidewalk, with us humans! And was actually driving at about than human walking speed (5 km/h).

Driving on the sidewalk is amazing, but this eventually caused complaints to the city, and because of that single point, in late 2022, the city of Tel Aviv removed the robots and announced they won't return anytime soon (link to source).

3. Yandex is behind it, Yango was the client

The manufacturer is Yandex, the russian leader in autonomous robots and cars. The company operating it was Yango Deli, a worldwide food supplier that was therefore probably delivering food.

I think I have been lucky to witness the experimentation of a silent revolution. City after city, shopping mall after shopping mall, restaurant after restaurant, companies like Yandex bring autonomous robots to the world.

The robot was equipped with ultrasonics, cameras, RADARs, and LiDARs. A huge stack for a robot this small and with this amount of risk. But it's classic robotics, and I bet there isn't much Deep Learning inside, as explained in my article about robotics and deep learning.

On Yandex's website, you can actually see the sensor stack.

The system worked very well, and it was much smarter than you would expect.

I'm saying this because:

Whenever the road was blocked, it was changing route and avoiding the obstacles, it was never stuck.

It can be due to a SLAM algorithm, which involved mapping as you drive, but it can also simply be an intelligent planning system; where the map generates many routes, the the lowest cost route wins. Read this post for more about it.

However, even though it seems all perfect, it eventually had a problem!

At some point, the robot got blocked in the street and stopped moving. I tried cleaning the path (there was some mud), but it didn't change anything. Either it reached destination and the client never showed up, or the robot had an issue.

What happens when a robot like this one gets stuck? I have no clue. After waiting for 15 long minutes, I went back to the coffee place I was at, disappointed, but still glad I could experience this.

The robot came back!

I almost split my cold coffee on the table. The robot was now driving in the other direction, to where I first saw it coming from!

In these systems, if the robot is blocked, it can be operated remotely, or just go back to its base (the restaurant). This is probably what happened here. Like a Roomba goes back to its home station, the robot can go back to where it came from.

It could also have manually (or remotely) been unstucked by Yango Deli.

Clever, and not that easy to setup!

Because it was blocked, I was able to take a selfie with the robot!

Here's a picture of the robot (on the left):

Notice the ultrasonics (the grey circles), the blue lights to indicate it's moving or stopping to humans and cars, the cameras (the black circles), and the LiDAR on top of it.

Aftermath: Is the Revolution on?

Yes.
We are in the middle of a revolution.
No matter what the press can say.
No matter how many companies shut down because they reaches the burn rate.
And no matter that this experimentation I went for stopped.

A revolution is happening.

From transporting people to transporting goods, the world of transportation is changing. And you can experience that when going to cities that partner with it.

Some companies that may be totally unknown are already testing, implementing, delivering, and transforming their business model.

I was amazed to see how well the system worked in general.
Am I disappointed that it blocked for 15 minutes? Yes.
Was it sometimes stopping for no reason because of ghosts? Definitely.
But in general, the robot was able to drive in a narrow street without any human!

But there is also a real impact on people's day to day. Delivery can get even faster, safer, or simply possible for certain regions of the world.

What about delivery guys?

We also need to think about delivery guys.
Many people think this is a threat to them.
I don't.

I saw a man carrying 10 boxes of water bottles yesterday.
He was sweating from the heat, suffering from the weight, and he even dropped some packs by accident.
Delivery can be a hard, and even dangerous job.

How many delivery people get injured or killed every year?

In 2021, a study suggested 1/5 amazon delivery people had accidents at work.

Your work matters.
Be proud of it.
Autonomous tech is changing the world, silently.
And you have the opportunity to be at the heart of this transformation.

If you want to learn how to build systems like the one I talked about today, then I invite you to receive my daily emails here.

📩
If you want to learn how to build systems like this one, then I invite you to receive my daily emails! Over 10,000 people read these every morning and implement what's inside to change the world!
Receive your first email here.